Alexandros Guest House
Skiathos
Skiathos belongs to the Northern Sporades, a cluster or islands situated in central Greece. The other three islands are Skopelos , Alonisos and Skyros. Although it is the smallest of the four, it is the most populated and most visited.

It possesses an abundance of Pine trees and over 60 sandy beaches, scattered around the island. The most beautiful and most famous one are Koukounaries, located at the South-west part of the island and Lalaria, located at the North side, accessible only by boat.

Other beautiful beaches are Achladies, Vromolimnos, Agia Paraskevi, Troulos, Maratha and Agia Eleni. These beaches stretch out along the Southern part of the island and are connected to paved streets.

In the Northern part of Skiathos are beaches of rough and virgin beauty and are preferred by those who wish to avoid the busy tourist places and enjoy their privacy. These beaches are connected to dirt roads.

Skiathos has two Monasteries, Panagia Evangelistria and Panagia Iconistria, both dedicated to The Virgin Mary, as well as a plethora of chapels.

There is an airport called Alexandros Papadiamantis, which connects the island with many European countries. There is also a port which acts as a bridge towards mainland Greece and Volos.

In Skiathos’ Chora are many restaurants where you can try traditional Greek cuisine as well as fresh seafood.  When the sun sets, you can enjoy a delicious cool cocktail at the bars that are all around the old harbor, viewing at the infinite blue and go on having fun till the wee hours of the morning. 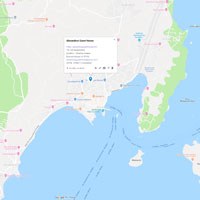 LOCATION
Guest House Alexandros is a family owned business since 2010, located in Skiathos town, in a quite area just five (5) minutes’ walk away the main Papadiamanti St. is ten (10) minutes’ walk from port of Skiathos and only 2 kilometres away from Skiathos airport.
© 2017 - 2022